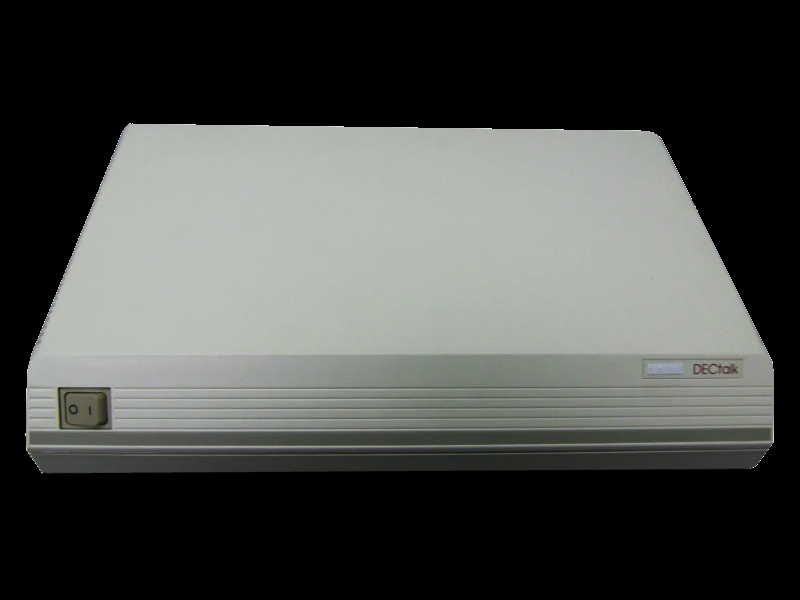 DECtalk was a speech synthesizer and text-to-speech technology developed by Digital Equipment Corporation in 1984, based largely on the work of Dennis Klatt at MIT, whose source-filter algorithm was variously known as KlattTalk or MITalk.
The first DECtalk units were seen in 1984. They were standalone units that connected to any device with an asynchronous serial port. These units were also able to connect to the telephone system by having two telephone jacks. One connected to a phone line, the other to a telephone. The DECtalk units could recognize and generate any telephone touch tone. With that capability the units could be used to automate various telephone-related tasks by handling both incoming and outgoing calls. This included acting as an interface to an email system and the capability to function as an alerting system by utilizing the ability to place calls and interact via touch tones with the person answering the phone.
Later units were produced for PCs with ISA bus slots. In addition, various software implementations were produced, most notably the DECtalk Access32. Certain versions of the synthesizer were prone to undesirable characteristics. For example, the alveolar stops were often assimilated as sounding more like dental stops. Also, versions such as Access32 would produce faint electronic beeps at the end of phrases.
In the final years of DEC, early/mid-2000, the DECtalk IP was sold to Force Computers, Inc. In December 2001, the IP was sold from Force Computers, Inc, to Fonix Speech, Inc. (now SpeechFX, Inc.), which offers DECtalk as a small-footprint TTS system.
Manual: